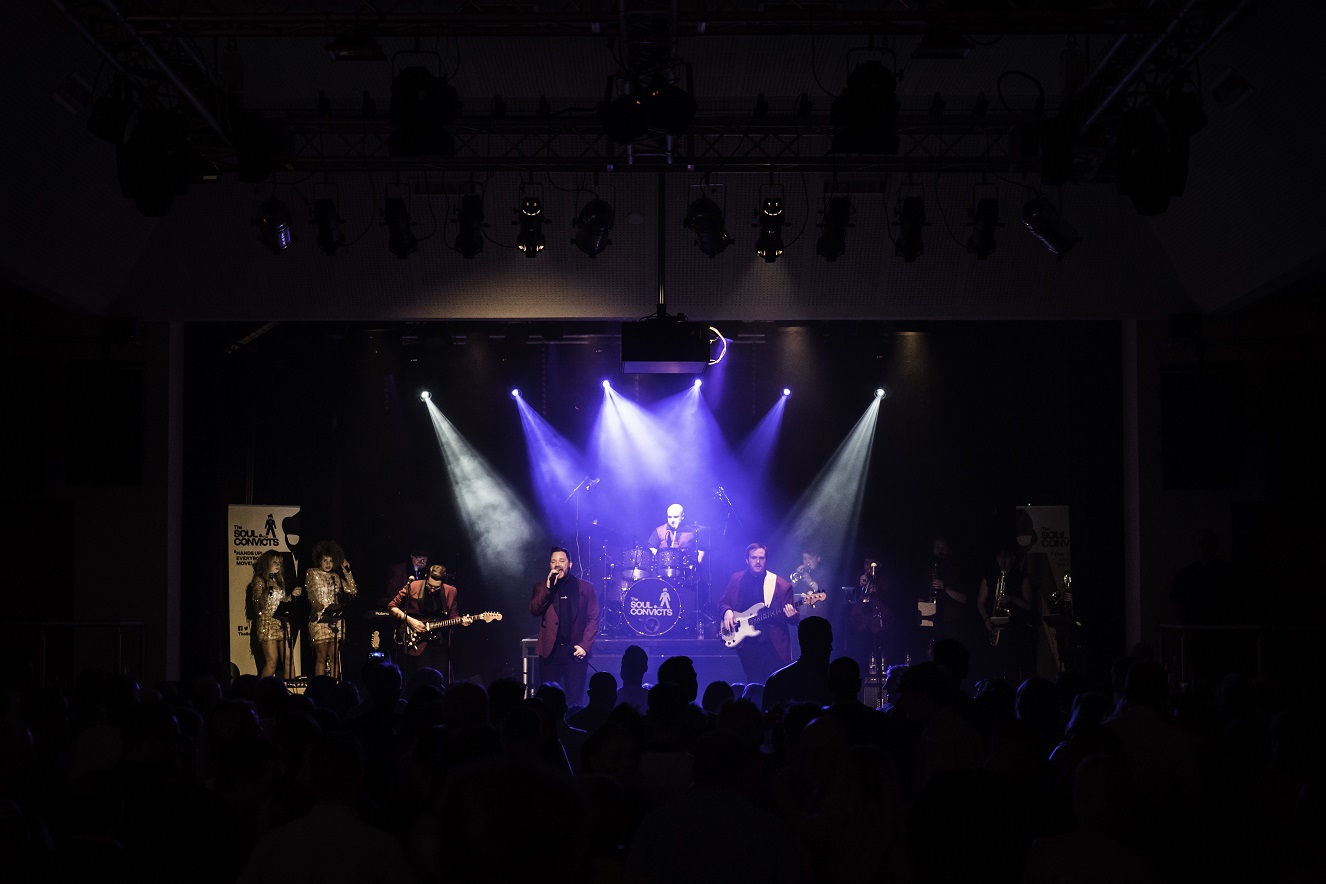 After last year’s storming performance, the band are back at The Grand in Clitheroe on Sunday 27th August. Playing a mixture of classic and new material, this is a great chance to see them in a live setting. The night will also feature support by friend of the band, Grace Davies. Get your tickets now!

“When ‘The Soul Convicts’ hit town there’s no way you can do anything else but sit up and listen!

And it’s more than likely you won’t be sitting long because you’ll be on your feet dancing.

So it was at Turf Moor when the band’s opening number paid tribute to Gail with their own arrangement of the Otis Redding version of My Girl … with singer Danny Finn emotionally belting out the words “My Gail”.

The 10-piece band don’t just dwell on the sounds of the sixties although that’s where some of their best music comes from.

They mix the Stax-Atlantic and Motown stuff with some 70s and 80s funk and breath some fresh air into the act with Amy Winehouse, Beyonce, and Bruno Mars numbers.

But on Friday they were playing to a mainly old soul crowd and they gave the dinner a real wow factor.

Just a taste of what was on offer was Sam and Dave’s Hold On, I’m Coming; Temptations’ Get Ready; Frankie Valli’s Beggin’; James Brown’s I Feel Good; Stevie Wonder’s Superstition; Rose Royce’s Carwash; Beyonce’s Crazy In Love, plus a collection of other dance classics.

The show closed with Wild Cherry’s Play That Funky Music which earned a rapturous ovation and encore.

Whatever decade they turned to, the band, with their rasping horn section, played in fabulous harmony.

“The Soul Convicts were a “shot in the dark” for Barrica Wines at our annual
event last year, but they were so well received we have booked them again
this year – unheard of! You can’t help but get up and dance when they
perform – their music is so infectious, they should come with a health
warning!”

“Our event was a 1920’s themed fundraiser hosted at Turf Moor, Burnley on Friday June 26th. We welcomed over 400 guests and the icing on the cake without a doubt was the music and entertainment provided by the band ‘The Soul Convicts’. We wanted only the best on the night and so I asked around and these guys came highly recommended from a couple of different sources.

Their attitude and service prior to the night was second to none – they were excited to be a part of the event and professional in asking us what we expected in terms of set times and involvement. They were dressed  for the occasion and arrived on time, looked the part and totally stole the show. I’d have to say one of the most impressive things about this band is the number of them and the visual impact that had on the venue. Each with their own talent and instruments, they totally brought the room to life and impressed the room with their set from start to finish.

After the gambling was over, everyone was up on their feet and there wasn’t an inch of dance floor space left. They performed a wide range of songs that everybody loved, laughed and sang along to. As organisers of the event, we even got involved on stage! They performed an extra couple of soul songs beyond the time they were due to finish much to the delight of the audience and I have been asked countless times from a number of different guests who the band were and how they can be booked.

If another event is hosted next year, The Soul Convicts will be the first booking I make, without a doubt. “

“Just wanted to say that you guys got us all dancing at the wedding last Saturday…music to move to for sure. Great for all ages. Fantastic. You made the evening. Everybody was talking about it, it was amazing. We want to book you for a summer party every year!”

We booked the Soul Convicts to play at the evening reception for our wedding, having seen them play a number of times previously.

Before the event, the band gave us the opportunity to request songs that they might not normally play, but we were happy to go with their judgement, as it always works.

As always, they were fantastic! The mix of classic Motown hits and modern songs went down an absolute treat with our guests, and many commented to us that they had never seen a wedding where the dance floor was so full and the chairs so empty!!!

I can’t recommend this band strongly enough! They sound (and look) the part, and are friendly and get the audience involved as well.

Get them booked, as we want to see them again somewhere soon!

A huge thanks to The Soul Convicts who travelled all the way to Glasgow to play at our 10th wedding anniversary party. They are a well rehearsed great sounding band that got everyone up on their feet dancing. They have an excellent range of music choice and the variation in songs kept the night going. Without doubt The Soul Convicts are an excellent band, a great bunch of guys and gals, and a fantastic choice for any function. We will recommend them to anyone who asks both sides of the border!

What can I say, you were absolutely brilliant, thank you so much to each & every one of you………
One thing for sure when anyone asks or I need a band in the future the First call/mail I am making is to you guys & fingers crossed you’re free.

Hi,
Just wanted to say a huge thank you for making our evening do amazing – everyone absolutely loved you – as you could probably tell!!
I know word of mouth is an excellent way to promote business and I know we, and our guests, will definitely recommend you to any others who are looking for a band.
Thanks again
Take care
Jan and Rob – Wedding, Chipping Village Hall